Understanding and approaching the differences between theatre and film.
April 14, 2020

Literalism is the great enemy of theatre. If I wanted to see something literal, I would go watch a period movie.

Instead, theatre is an art form of metaphors. It is not merely a visual medium. If it were, you could just have a painter make a pretty stage picture. But that’s not what we’re going for. It’s through metaphor that we, as audiences, fill in the gaps. It’s through metaphor that we come to better understand ourselves, better exercise our empathy. The possibilities in theatre are limitless when it is treated in such a way. Suddenly, every aesthetic limitation it seems to have is seen in a new dimension.

Likewise, there is film that reproduces the bland and theatrical (that is to say, naturalistic theatre)—merely aiming to be a photographic reproduction of a stage show—and then there is film that uses all the resources of cinema and cinematography—moving images, sound, editing—to actually create.

The power of film comes from the inter-relation of its images and sounds as they are cut together; images coming into contact with other images are analogous to colors coming into contact with other colors when painting. The act of creation involves moving images and sounds—capturing people, not just characters—sliced together into something that is a personal manifestation of the filmmaker’s unconscious.

Which brings us to a shared similarity: both theatre and films—and all art that I know—are acts of creation, driven from the unconscious.

Merely reproducing something—whether that be theatre reproducing film (such as in a piece that doesn’t understand what form it wants to be), or film photographically reproducing theatre (such as in a boring movie that just tries to film actors doing acting things)—is not art. Even attempts to naturalistically reproduce “life” are not necessarily art. Real art involves actual creation, creation that makes something that is alive. (A sink/swim test for a piece of theatre is the simple question: does it feel alive?)

There can be exceptions: sometimes the humbling, human attempt at representation can be artful. Still, I would argue that even these attempts—usually seen in grand paintings—are not aiming at exact photographic reproduction. They are aiming at a deeper realism: to portray the world as it is, not how it looks.

For example, when I look at one of Rembrandt’s late self portraits (this one at the age of 63, in the National Gallery in London) I see, on the one hand, an attempt to reproduce life: 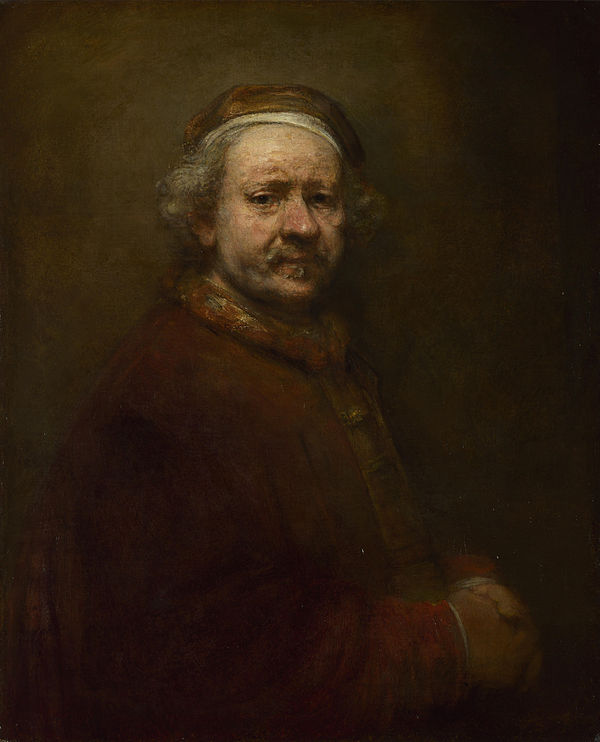 But on the other hand, Rembrandt’s painting portrays the world as it is, not necessarily how it looks. The facial detail is there—capturing his older, declining face—but the rest is loose, blurry, shadowy. What Rembrandt wanted us to see was the expression of this moment on his mind—drawing focus to his aging face, seen in the same way his younger self-portraits were.