The Sound, the Silence, the Invisible

Life is terribly noisy. Can we do anything about it?
February 5, 2020

Last year, noise complaints to 311 in New York City reached an all-time high. Helicopters, street noise, airplanes, music, and other 21st century ambiance combine with the increasing density of cities to create a perpetual noisiness to modern day urban life. That’s why everywhere you go in the city you see people with AirPods in, trying to block out the world with more noise. (Apple’s new AirPods Pro even have noise blocking technology in a tiny, wireless package; I’ll admit that I’m attracted to the idea.) These “wearables”, as Apple classifies them, are in essence an extension of the ear, in McLuhan terms. We are replacing the noise with our own self-chosen noise, like our algorithmically verified Discover Weekly, or Michael Barbaro’s lulling voice on The Daily. If we took our earbuds out, we’d have to face the suffocating, unbearable loudness that drills into our minds, the hellish and terrifying fireball of noise that is the subway at Union Square. It can all feel a bit like we’re in Uncut Gems-land, unable to quite grab a chance to breathe. This noise is hot, direct, in-our-face.

Loud noises are not good for us. They spike stress hormones, which can lead to a host of health issues. And as cities become more dense, the noise will only get more deafening. (And will likely be worse in poorer communities and communities of color.) That’s why silence is now a luxury: only the affluent can afford space where they can be in peace. The other day I stumbled upon a new startup called “getaway”. The premise? An easily rented cabin with amenities in nature to “unplug from the daily hustle”, complete with a phone lock box. At prices around $200/night, it’s like rich camping, and reminiscent of the original American escaper-from-society-kind-of, Thoreau. But despite the faux-austerity, the attraction is clear: get me into silence, a “pure” state to re-connect.

The heat of modern loudness must be countered with the coolness of nature, of simplicity, of boredom, of quiet. Of sitting and thinking. Sure, we have bandaid solutions, like meditation “apps” that use your phone to help you meditate. But these are a bit like dealing with the devil, a slippery slope of endlessly cycling Wellness Capitalism perpetuated by Instagram and its Explore page. We don’t need more information. What people are looking for is not another app, or podcast, or ebook. It’s something far deeper.

One trait of a cool society is a capacity for nuance, which is something we, as a scaldingly hot society, do not have. But one of the best places to find nuance is in art. In John Cage’s famous 4’33, there is nothing but silence (actually rests) for the piece’s entirety. What Cage might be after is the sense of nuance that accompanies empty space, and the incredible involvement of the invisible. By reframing our perspective on music itself, we fill the invisible silence with emotion, thought, and reaction.

In the comics, there is something called the “gutter”. It’s the space in between the panels. In that space, everything that makes comics work happens: our brains take two images, and link them together into a narrative. 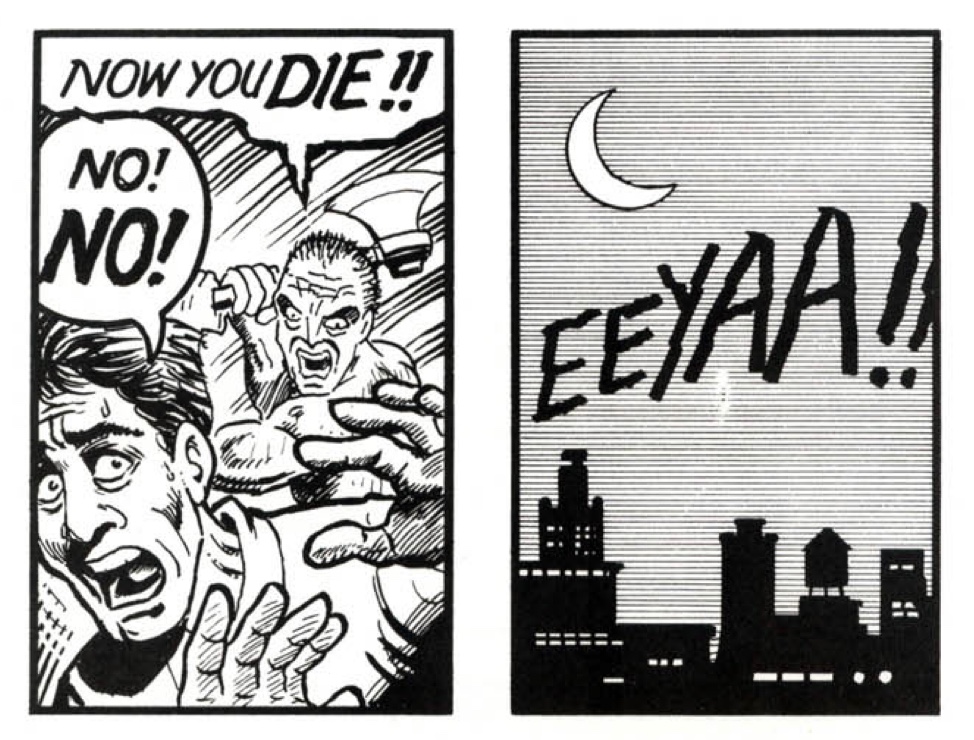 Try to not tell a story from these two images, from Scott McCloud’s Understanding Comics

The grammar of this invisible magic is called “closure”. Closure is what we do all the time, when we fill in the invisible. It makes us complicit in a piece of art: whether that’s as a reader in comics, as an audience member in the theatre, or as a listener to John Cage’s 4’33. In theatre, the invisible is many things: it’s the baggage we bring in as an audience, it’s the unspoken and repressed parts of life, it’s the spiritual, and it’s the actual act of theatre itself, which is a medium of metaphors defined by incomplete representations that require our brains to fill things in. The invisible is nuanced, and the invisible is often silent. But that doesn’t mean it isn’t heard; the best art leaves an impression on us in a deep way, such that we’re not even sure we can point to exactly how or why. That’s the invisible at work. The invisible, then, is an antidote to the noise of today.

“Build your film on white, on silence and on stillness.”