I listened to a great interview with Nick Kokonas on The Tim Ferriss show the other day. Nick is the co-founder of Alinea, one of the best restaurants in America.

Nick is interesting because he is a businessman, a former trader, involved in a field that has a lot of artistry to it. (Alinea is known for its breathtaking restaurant experience.)

Nick talks about two concepts that are really helpful to understand if you’re interested in starting a theatre company (as I am).

The first is this idea of Asymmetric Risk. I first learned of asymmetric risk from the work of Nassim Taleb (who Nick talks about on the podcast). The idea is that we value things wrong all the time, because we don’t think of the asymmetric payoffs. For example, we might invest in something that has a 99% chance of getting us $5, and a 1% chance of us losing $5000. If we look at it in really basic terms - the odds are so good! We should definitely invest, right?

Well, no. And pretty much anyone can see why: the downside of losing is far greater than the upside of winning. The risk is asymmetric.

Asymmetric risk can go both ways. What you want to look for is opportunities that are the inverse: their downside is limited, but their upside is huge. These can also be referred to as “Positive Black Swans”, as Taleb shows in his book Antifragile: 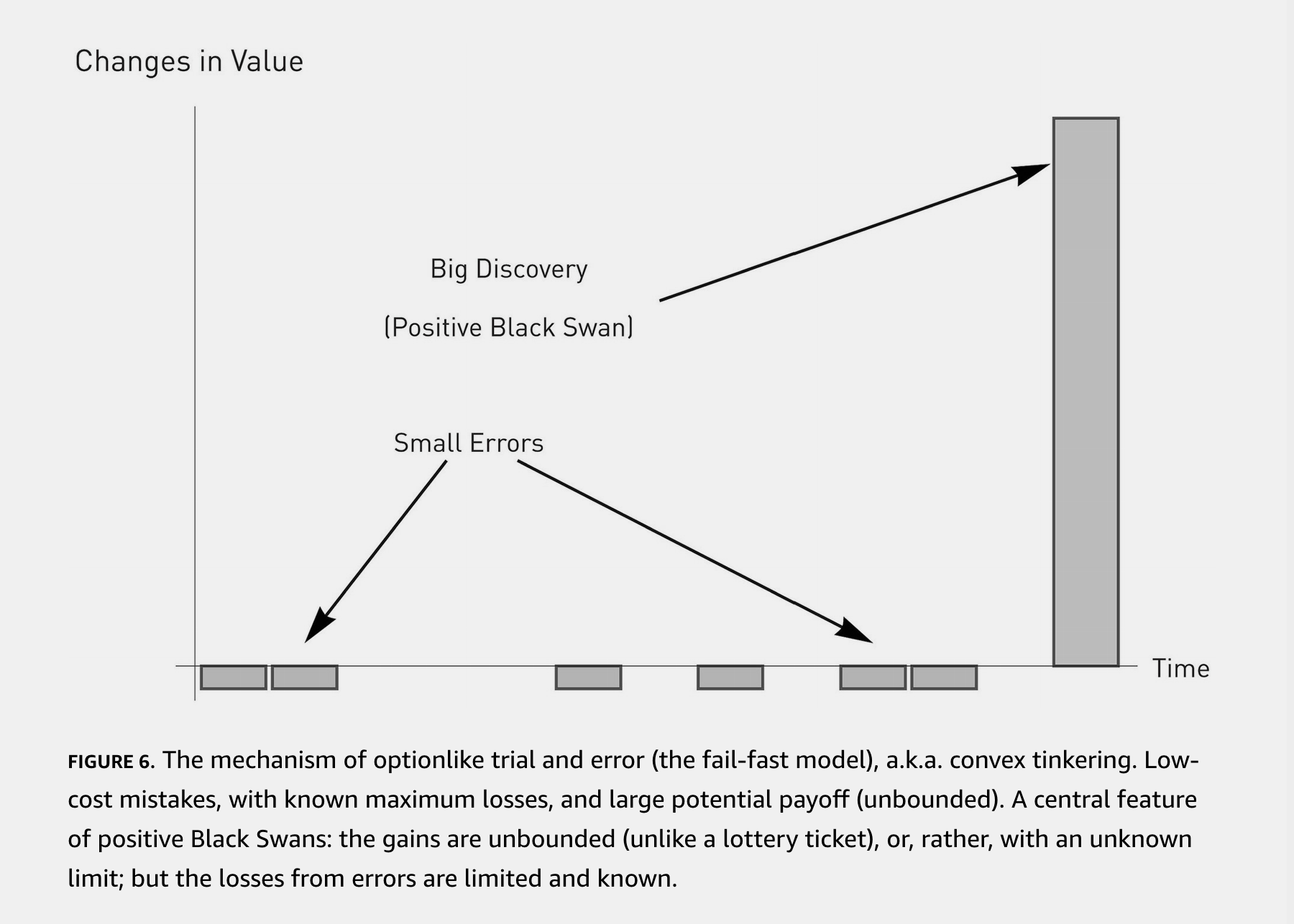 In theatre, for example, if you can find a way to reliably produce shows that generally break even or even lose some money, but every once in a while you produce a Hamilton, you have cracked the code. You are limiting your downside (you have to make sure you’re not producing a show that has huge, unlimited downside - a chance to ruin you) and keeping the unlimited upside (it won’t happen very often, but when it does, it more than pays off).

Kokonas talks about this in terms of restaurants, with this stat that gets thrown around that “on average, 95% of restaurants fail within the first year.” Even beyond this data probably having no basis, averages are very misleading and dangerous, a type of two-dimensional thinking. What Kokonas saw was that, in essence, starting a restaurant was priced wrong: there was asymmetric risk. Sure, maybe 95% of restaurants fail, and they lose a little bit of money. But maybe the 5% that succeed do so very, very well and last a very long time.

So this leads to Kokonas’ second idea (his own), of High Small Hoops. The idea is that, if you are smart and a hard worker, you should be seeking the high small hoops, like starting a restaurant, starting a startup, or even making a theatre company. So 95% of restaurants fail. Great! That means there’s much less competition if you can make it through the High Small Hoop. The challenge of hitting that hoop is the fun - it’s the thing that you obsess over, that keeps you up at night (in a good way) and gets you up in the morning. If you really put all your effort into it and have a totally fresh idea, Kokonas argues, are the odds really 95% that you’ll fail? Probably not.

And besides, what’s a year anyway? If you can find a way to mitigate your risk so that the downside is really not so bad, then you have a pretty appealing proposition on your hands.

My theory is that the same is true for theatre. There is lots of Asymmetric Risk in theatre, and the High Small Hoops theory is very much present. Everyone and their mother tries starting a theatre company, and most fail. Most don’t understand or even think about risk, and most just aren’t very good. (The other important part is that Kokonas had met someone he believed was a world-class chef who nobody knew yet, and they wanted to re-think every part of the restaurant experience – right down to why we even think candles are romantic. How many theatre companies have world-class talent and are trying to re-invent the theatrical experience? Not many.)

It seems to me if you have talent, work hard, question everything that is “standard”, understand asymmetric risk, and aim for exciting High Small Hoops - that’s a recipe for some modicum of success. More on this in the future.